Update March 2014: Lin Htin, his wife Keiko and their two children have now bought out Housing Foundation’s share in their property. They now proudly call themselves the sole owners of their fantastic Avondale home! The team at Housing Foundation are very excited for them, and thrilled that all their hard work has paid off. We wish them all the very best for the future!

Lin Htin loves his new kitchen; in fact it’s his favourite room in the house. Having his own home is a dream come true for the chef who never imagined he would have a brand new kitchen of his own to cook in.

He and his wife Keiko and 4 year old Hikari are happy to show you around their new home (their 7 year old son Hiroki was at school when we visited). They moved in to this house with the assistance of NZ Housing Foundation . The four bedroom home is situated in the Foundation’s Rosebank Road, Avondale development.

What an exciting change it was for the children, who were used to sharing a room in the cramped two-bedroom unit the family was renting in Kingsland. “I love to play. I’ve got my own room”, says Hikari.

Lin describes the small unit. “There was no space. When I came home from work I either had to sit on the couch or go to bed. It was very cold and damp. Because it was close to the railway, it was very noisy. Here it’s so quiet.”

The family went from what they called ‘tiny to huge’. Their new home has four bedrooms, a large open-plan living and dining room, a spacious kitchen with all the mod amenities, a large bathroom, double garage and a small garden.

“This is the kind of house everybody should live in. It’s a dream house. When I received the keys I was amazed. The children were so happy they were running around with delight.”

Born and raised in Burma, Lin came to New Zealand 15 years ago. When he arrived he was unable to speak English, had no qualifications and no job. With sheer determination and hard work he studied, qualified, learned the language, worked his way up from the bottom, met his Japanese wife and was focused on creating a strong future for his family.

The security of having their own home has really changed their lives. “We now feel completely settled. We’ve been able to think long-term. We wanted a safe area with good schools and we’ve been so lucky to have a house here.”

Lin describes their new home as strong, spacious, well built with a good design. “The materials they have used are good quality – weatherboard, aluminum windows, insulation. The house is built in a good position for the sun.”

Lin and Keiko knew it would be almost impossible to get an affordable home without the assistance of the NZ Housing Foundation (NZHF owns 27% of the house). Even working incredibly hard as head chef at an Auckland café and baking at another, Lin found it difficult to save.

“We were struggling. It was impossible for us to get a house.”

He heard about NZHF from a bus driver who had seen information in the local paper. The next day he phoned to discuss options with the Foundation. At that time, he wasn’t earning a steady income, so he changed jobs and continued to work towards meeting the targets in the Housing Foundation’s programme. It took him six years, but it was well worth the commitment and hard work. He has two friends who have followed in his footsteps and are now also in Housing Foundation programmes. 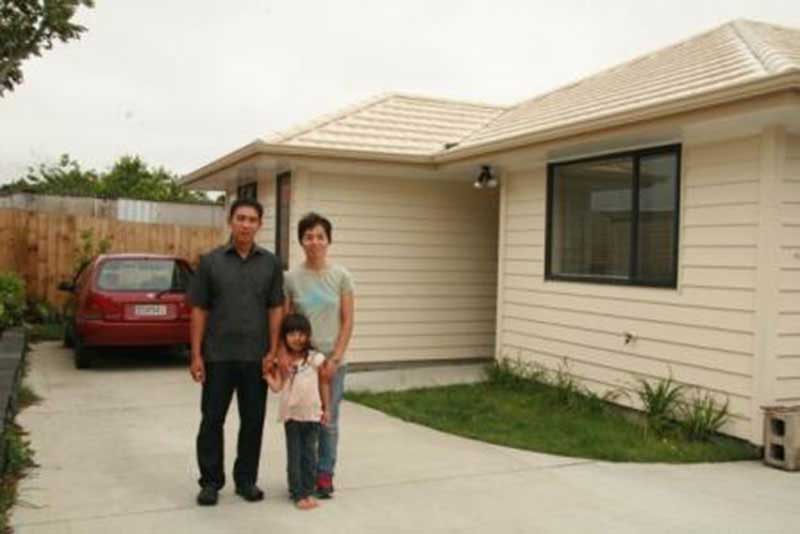 To all our valued families, stakeholders and suppliers

This describes the steps Housing Foundation is taking to respond to COVID-19 while continuing to operate.

We will continue to operate while ensuring we do everything possible to keep our team, families, stakeholders and suppliers safe.  The safety of our employees and households in our home ownership and rent to own programmes is a priority. The steps we will take to reduce risk include:

Housing Foundation team members will be available to be contacted as follows:

If you have any questions or concerns, please do not hesitate to contact us on one of the above emails or reach out to me or a member of the team directly.

We hope you continue to stay safe and remain well.